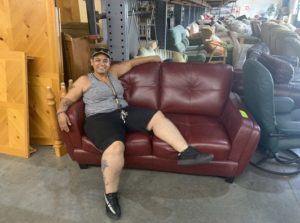 For Maritza, her emotional scars run deep having lost her dear friend, Stanley, who was 23 years old when he was killed at Pulse.

“I saw him earlier that night right before the bullets went flying,” Maritza said. “He said he was going to get his hip-hop on at the other side of the club. He gave me a hug and a kiss and said, ‘I’ll see you next week.’ That night was the last time I would ever see him again.”

After the Pulse shooting, Maritza said she lost everything and became homeless for five years. She was living with her now 27-year-old son when the shooting happened but ended up leaving. She also has an 8-year-old granddaughter.

“I went through a mental breakdown,” she said. “I couldn’t surpass what happened. I was living from place to place and bouncing from hotel to hotel. The only thing I still have and never let go of was my doggy.”

Maritza wants to rebuild her life. She sought help from The LGBT + Center and Orlando United Assistance Center, which helped her secure housing. The agencies referred Maritza to The Mustard Seed of Central Florida for furniture assistance so she could make her empty house into a stable, functional home. Maritza also obtained employment at U-Haul.

“Thank you for everything,” she said while beaming with pride as she sat on the red couch she selected. “(This furniture is) going to be well used.”

Having grown up in Bronx, N.Y., and “the projects,” Maritza said her upbringing prepared her for “the worst.”

Maritza almost didn’t go to Pulse on that fateful day. She said she was planning to hang out with a friend at Southern Nights Orlando (then called Revolution). But when her friend “didn’t hit me up, I decided to go with a group of friends who were going to Pulse.

“It was Latin night, and we were sitting in the corner by the bathroom on the Spanish side of the club. We were just having some fun and living our lives. All of the sudden I heard shots. Friends thought it was part of the song. I was like, “Nah, I’m from the Bronx. That’s not part of the song.

“The DJ turned the music down, and that’s when you heard more shots and screaming,” Maritza continued. “My friend was having a panic attack. She was frozen. I grabbed her by the wrist, and I pulled her into the bathroom like she was a bag. I bruised her wrist, but she later thanked me for that. We were hiding out in the bathroom with about 20 other people, and I held the door shut. All I wanted to do was get my friends out and get them out safely. Unfortunately, I didn’t get all my friends out.”

Maritza said she still has triggers and can’t go to nightclubs because it causes anxiety.

“I can’t deal with fireworks either,” she said. “I replay that night every night.”

Maritza will be attending the memorial service Saturday at Pulse, which was designated as a national memorial by the Senate this week.

Carly, her husband, Omer, and their 17-year-old son fled Venezuela in 2021 to escape danger for speaking out against the country’s tyrannical government. They took a bus to Colombia, then flew to Mexico and crossed the border into the United States to seek asylum. They were political activist…

Kimberly and her dog, Hasani, a shih tzu poodle mix, lived in a car for two months after moving to Orlando from California. Kimberly, originally from Orlando, worked at a motel in California but had to leave the state after struggling to pay her bills. She contacted homeless shelters in Orlan…

We’re a Finalist in the Victory Cup Initiative!

The Mustard Seed is honored to have been chosen a finalist among nine other Central Florida nonprofits for the Victory Cup Initiative!

The Victory Cup Initiative is a platform where companies come together for philanthropic investing with a twist. This unique event is designed to provide a high… read more

Thank you to The Joe & Sarah Galloway Foundation!

Our sincerest gratitude and appreciation goes out to The Joe & Sarah Galloway Foundation for its $15,000 grant award to support our Furnishing Basic Stability for Families Program.

Your investment in our mission Makes a House a Home for Central Florida families in need.
… read more