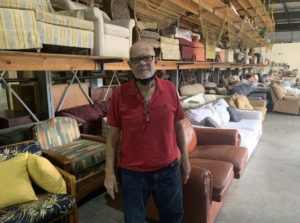 The Mustard Seed of Central Florida assists more than 240 veterans each year with furniture and clothing.

Thanks to your support, Ronald, who served in the Army during the Vietnam War, left The Mustard Seed with a new bed, couch, tables, television and home décor. Veterans Affairs, which is helping Ronald obtain new housing, referred him to The Mustard Seed.

“This is awesome,” Ronald said of receiving furniture assistance. “When I moved into my room, there was absolutely nothing. There weren’t even towels or face cloths. I couldn’t believe I could get this furniture. I’m in awe.”

Ronald rents a home in Orlando with two other veterans. However, he has to vacate the property in January because his landlord is selling the home. Ronald said the home is fairly empty right now, and when he transitions to a new place, he’ll bring his furnishings with him.

In the Army, Ronald served as a medical specialist based in a hospital in Hawaii. During the Vietnam War, he traveled back and forth to Vietnam to treat injured American soldiers while bringing them home on an airplane.

After the war, he left the Army and obtained bachelor’s and master’s degrees in speech pathology from Emerson College in Boston and Southern Connecticut State College in New Haven, respectively.

Ronald became sick a year ago from a mold problem in his apartment while living in Costa Rica.

Ronald, who’s now retired, uses the aid of a walker to help with his dizzy spells. He moved from Costa Rica to Orlando in January 2020.

“I’ve been used to being on my own and taking care of myself,” Ronald said. “I had to ask for help, and I don’t like asking for help. This help has been a blessing, and I’m grateful.”

Kimberly and her dog, Hasani, a shih tzu poodle mix, lived in a car for two months after moving to Orlando from California. Kimberly, originally from Orlando, worked at a motel in California but had to leave the state after struggling to pay her bills. She contacted homeless shelters in Orlan…

Vidette and her husband, Christopher, 4-year-old son, Micah, and Vidette’s mother, Dorothy, were upstairs in their townhome dancing to oldies music when their dog started barking downstairs. It was about 2 p.m. on a Saturday in March when the family heard a knock on the door but ignored it, assumi…

Maritza, 46, survived the Pulse nightclub shooting that killed 49 victims and wounded 53 others on June 12, 2016. For Maritza, her emotional scars run deep having lost her dear friend, Stanley, who was 23 years old when he was killed at Pulse. “I saw him earlier that night right before the bullets…

Thank you to The Joe & Sarah Galloway Foundation!

Our sincerest gratitude and appreciation goes out to The Joe & Sarah Galloway Foundation for its $15,000 grant award to support our Furnishing Basic Stability for Families Program.

Your investment in our mission Makes a House a Home for Central Florida families in need.
… read more

We’d like to thank our event sponsors, in-kind sponsors, silent auction donors, Mustard Seed Board of Directors, attendees and volunteers for making our Raise the Table fundraiser a successful event! Thank you for believing in and supporting our mission!

A special thank you to our event emcee Car… read more